Nanographenes(NGs), a class of large polycyclic aromatic hydrocarbons (PAHs) that extend over 1.0 nm5, have attracted considerable attention both in the scientific community and in technological spheres on account of their unique self-assembling, redox, and optoelectronic properties. Of particular interest are the coronene (COR) homologous molecules (Fig.1), such as the bowl-like corannulene and contorted hexa-cata-hexabenzocoronene(c-HBC). which have been widely applied in field-effect transistors, light-emitting diodes, and nonlinear optical materials. However, large nanographenes often suffer from instability upon exposure to light, reducing considerably the stability and life of graphene-based materials. Hence, designing an artificial receptor, with the property of high binding affinities toward nanographenes and protecting them from photo-degradation, is a challenging, yet worthwhile, objective in noncovalent synthesis. To date, with the unremitting efforts of many researchers, the research on cage-like receptors has made great progress, though these receptors can only encapsulate planar and smaller aromatic guests, for the simple reason that their contorted conformations lead to less shape complementarity in order to fit within the cavity of the host.

Given that, Professor Yu Liu of Nankai University, and Professor Stoddart, J. Fraser, Nobel laureate of Northwestern University, together designed and successfully synthesized a trigonal prismatic hexacationic cage(TPACage6+), which has a large cavity and adopts a relatively flexible conformation. It serves as a receptor, not only for planar coronene, but also for contorted nanographene derivatives with diameters of approximately 15 Å and thicknesses of 7 Å. A comprehensive investigation of the host-guest interactions in the solid, solution and gaseous states by experimentation and theoretical calculations reveals collectively an induced-fit binding mechanism with high binding affinities between the cage and the nanographenes. Notably, the photostability of the nanographenes is improved significantly by the ultrafast deactivation of their excited states within the cage. Encapsulating the contorted nanographenes inside the cage provides a noncovalent strategy for regulating their photoreactivity. Relevant work was published in the international top-level journal Nature Communication under the title “A Contorted Nanographene Shelter”.

Synthesis and characterization of TPACage6+

Researchers introduced two triphenylamine units into a hexacationic cage, TPACage6+ (Fig. 1). Its solid-state structure reveals that the cage adopts a relatively flexible conformation and has a large cavity with a diameter of 20.8 Å and a volume of 368 Å3. As a result, TPACage6+ can form 1:1 complexes, not only with planar COR but also with large contorted c-HBC derivatives with diameters of 15.3 Å. The solid-state (super)structure of TPACage6+ was determined unambiguously by single-crystal X-ray diffraction analysis of a dark red crystal, which was obtained by slow vapor diffusion of iPr2O into a MeOH solution of TPACage•6Cl after four days. The cage displays D3h symmetry, and possesses (Fig. 2) three identical large rectangular windows with average dimensions of 18.7 × 6.7 Å2. These rectangular windows allow potential guests to undergo association/dissociation with the internal cavity of the cage. 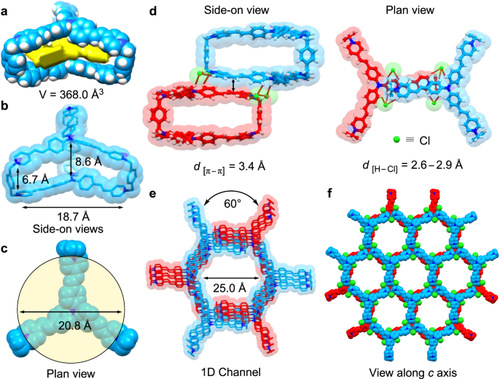 Solid-state (super)structure of the host-guest complexes

In order to elucidate the binding modes of TPACage6+ toward COR and c-HBC guests in the solid state, their complexes were analyzed by single-crystal X-ray diffraction(Fig. 3). Single-crystal X-ray diffraction analysis revealed that the COR is positioned closer to one of the p-xylylene linkers in TPACage6+, rather than in the center of the cavity. The COR guest is disordered among six different positions with an average occupation of one-sixth in the cavity of the cage. The COR guest is not only able to reside in any one of three slots formed by three pairs of styrene-pyridinium units, but it also occupies two positions in each slot. These observations indicate that COR is not large enough to occupy the entire cavity in the cage. Single crystals of 3H-HBC⊂TPACage6+ complex were obtained after numerous attempts by slow vapor diffusion. The outer benzenoid rings in 3H-HBC reside in the spaces between two styrene-pyridinium units in the cage. The reasons for this particular binding mode are (i) the [C−H···π] interaction between the hydrogens attached to methoxy groups on the 3H-HBC and p-xylylene linkers of the cage, and (ii) the fact that 1,2-dimethoxybenzene groups are more electron-rich than the outer benzenoid rings in 3H-HBC. 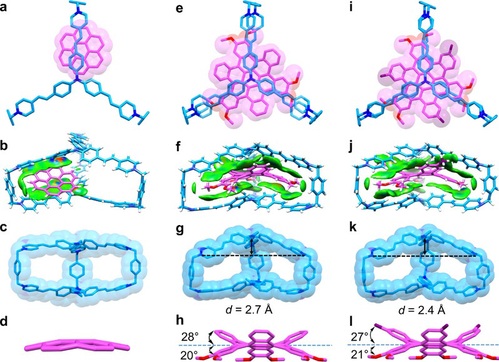 Guest protection within the cage

Upon exposing a 3H-HBC suspension to UV light (370 nm), we found, quite accidentally, that the suspension turned into a clear solution. Upon adding 2 equiv. of TPACage6+ to a MeCN/CHCl3 (4:1) solution containing 0.5 mM 3H-HBC, we estimate that 99% of the 3H-HBC guest is encapsulated inside the cavity of the cage according to the association and disassociation equilibria. When this solution is irradiated with UV light (370 nm) for 120 min, the UV-Vis absorption spectra of its dilute solution show slight changes. The characteristic absorption peak of 3H-HBC at 384 nm decreases (Fig. 4) by only 4.7%. It follows that the TPACage6+ acts as a protective shield, reducing the photo-degradation rates of the c-HBC guests to a considerable degree.  The slow photo-degradation of the c-HBC guests after long periods of irradiation can be attributed to the dynamic and reversible nature of the host-guest complexes and the slight photodamage of the host. Possible reasons for the difference in the photo-degradation rate between the three c-HBC guests in the host-guest complexes could be the fact that (i) the different guests display different association/dissociation binding kinetics toward the TPACage6+, and (ii) the intrinsic photostability of the three guests is different. In order to ascertain the underlying mechanism giving rise to the additional photostability of c-HBC provided by encapsulation within TPACage6+, femtosecond transient absorption (fsTA) measurements were carried out to probe the photo-induced dynamics of 3H-HBC and 3H-HBC⊂TPACage6+ complex. Consequently, the photostability of the c-HBC guests is enhanced on complexation inside the cavity of the TPACage6+. 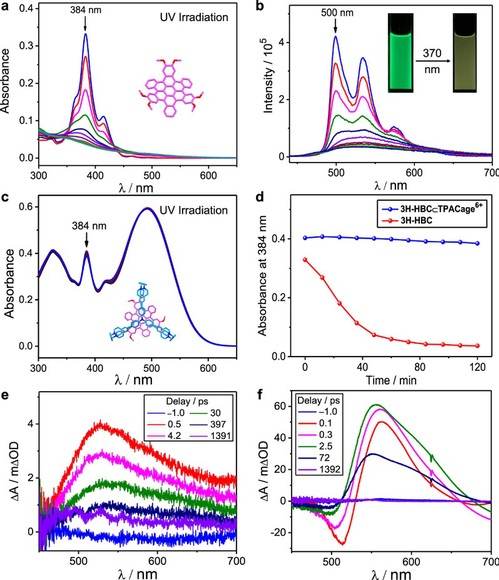