Alzheimer's disease(AD) is the most common chronic neurodegenerative disease among elderly group, which early shows in remembering difficulty. As the disease advances, symptoms can include problems with language, mood swings, movement disorder, impairment in visual spatial cognition and even behavioral or personality issues-- interferes daily life and declines bodily functions, ultimately leading to death. According to WHO, in modern society AD has been the fourth major killer after cardiovascular disease, cancer and stroke. However, there are only 5 AD drugs on neurotransmitters currently approved by the FDA that could only relieve the symptoms but cannot improve the situation of cranial nerve damage. Thus, during treatment it is biomedically significant to suppress aggregation of β-amyloid(Aβ) and trigger disaggregation of mature fibrils. Also, visualizing Aβ aggregates at high spatial resolution is beneficial for assessing the peptide assembly kinetics. 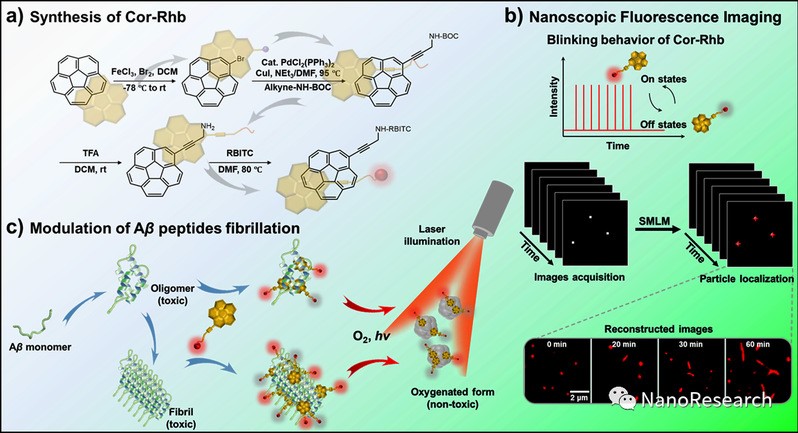 Figure 1 (a) Schematic illustration of the procedures to fabricate Cor-Rhb. (b) Nanoscopic imaging of amyloid fibrils with Cor-Rhb via SMLM. (c) The method to modulate Aβ1–40 fibrillation with Cor-Rhb under laser illumination.

Research finds that Cor-Rhb possesses improved blinking behavior, exhibiting long “off” state in the blinking process, which is well-suited for single-molecule localization imaging. The fibrils stained with Cor-Rhb reveal a comparable fluorescence image to those stained with the commercial ThT. According to the reconstructed nanoscopic fluorescence image, the measured diameter of the fibril is 24 ± 5 nm, which is close to the actual size of Aβ1–40 fibrils. The resolution is improved by more than ten-fold in contrast to that of the epi-fluorescence image. 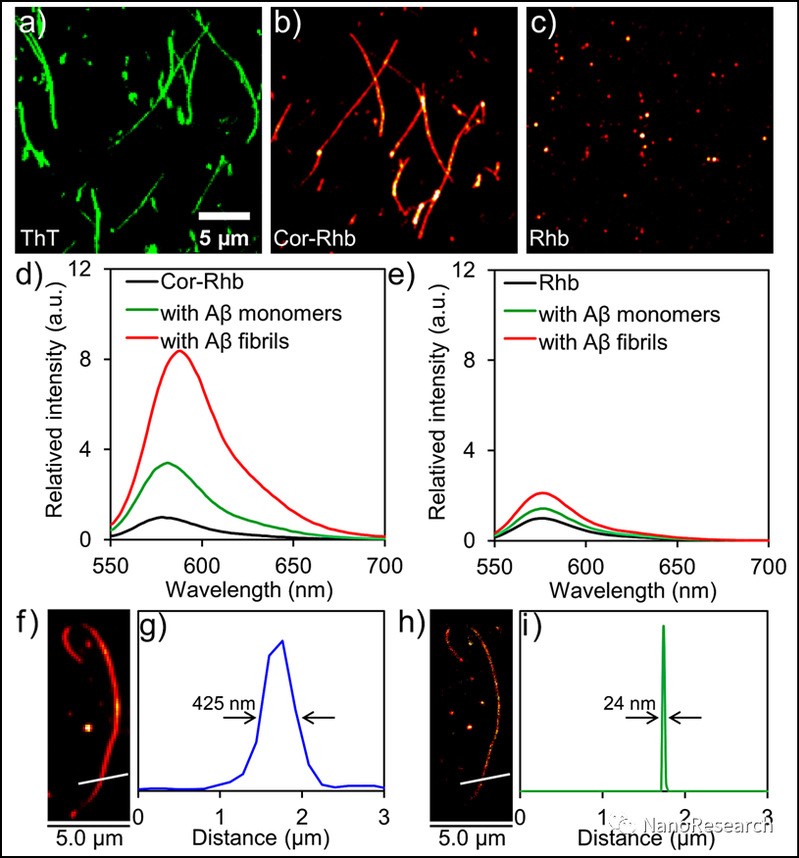 The fibrosis process of Aβ1-40 followed a typical nucleation growth mechanism, including three stages: lag, rapid growth and equilibrium. Through staining the sample with ThT, the inhibition effect of Cor-Rhb was confirmed with fluorescence imaging: Cor-Rhb under laser irradiation generates more ROS than Cor. Because the aggregation of peptides is closely dependent on the intermolecular hydrophobic interactions, oxygenation of hydrophilic oxygen atoms to the peptide or fibril could decrease the aggregative property by stabilizing the hydrated states. Oxidation of Aβ1–40 peptide with Cor-Rhb under laser irradiation can efficiently suppress the aggregation of monomeric peptides and trigger the disaggregation of mature fibrils. 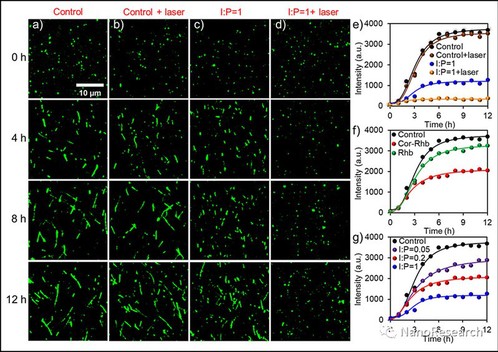 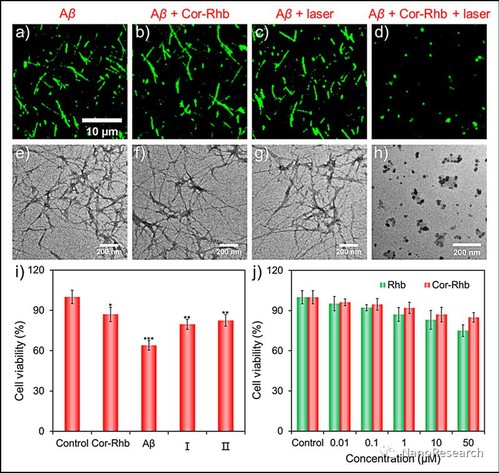 For a better understanding of the structural characteristics of the interaction between Cor-Rhb and Aβ1–40 peptide, submicrosecond-scale molecular dynamics (MD) simulations were processed for the complex of monomeric Aβ1–40 and Cor-Rhb. It is convinced that the dominant driving force for stabilization when Aβ1–40 binds with Cor-Rhb is ascribed to both the electrostatic and van der Waals interaction from the time-dependent interaction energy curves. In order to thoroughly analyze the contribution of each residue to the interaction between Cor-Rhb and Aβ1–40, energy decomposition for the binding free energies was additionally processed with the MM-GBSA method. Results indicates that Cor-Rhb makes strong interaction with Aβ1–40 mainly by π–cation/π–π interactions with Arg5/Ph 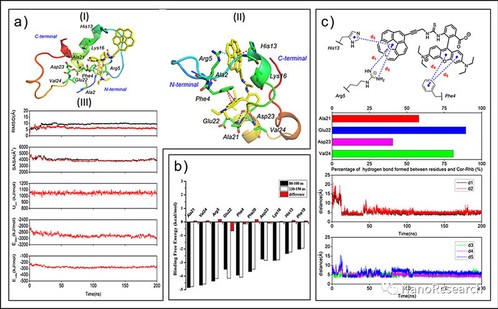 Prof. Dr. Lehui Xiao, investigator, PhD tutor, college of Chemistry,  Nankai University. Prof. Xiao works on recognition, motion detection and space-time fluctuations at single molecule/nanoparticle scale. In his group, single nanoparticle is applied as the probe for the detection of biomolecules in solution or within living cells with single particle spectroscopy. They are also developing some robust optical imaging methods for the dynamic tracking of individual plasmonic particles on the cell membrane or inside living cells. He has published a total of 70 SCI articles as the first author/corresponding author on J. Am. Chem. Soc.(2), Angew. Chem. Int. Ed.(4), ACS Nano(3), CCS Chem.(2), Chem. Sci.(3), Anal. Chem.(20). Prof. Xiao is also a youth editor of Chinese Chemical Letters(CCL).