01 Sketch of the article

A novel orthoquinone-based covalent organic framework (COF)−BT-PTO COF cathode was designed and synthesized for aqueous zinc–organic batteries. The ordered channel structure facilitates ions transfer and makes the COF follow a redox pseudocapacitance mechanism. Thus, it delivers a high reversible capacity of 225 mAh g−1 at 0.1 A g−1 and an exceptional long-term cyclability (retention rate 98.0 % at 5 A g−1 (≈18 C) after 10 000 cycles). The redox pseudocapacitance mechanism also ensures its high performance on magnification.

Energy sustainable developments are an important topic for the future, in particular eco-friendly energy storage systems. Recently, China's carbon peak and neutrality goals require the exploration and development of advanced electrochemical energy storage systems (EESs).1 Thus, a vast array of suitable EESs candidates are being investigated. Among them, rechargeable aqueous zinc-metal batteries (RAZMBs) are promising energy storage devices, especially in large-scale applications, in view of the many distinct merits in terms of their high safety, nontoxicity, and relatively low cost.

Till now, RAZMBs are mainly based on manganese, vanadium, molybdenum-based oxides/sulfides and Prussian blue analog-based cathode materials, which follow an inorganic intercalation/conversion mechanism. However, the electrochemistry process of these inorganic materials usually has slow kinetics, low Coulombic efficiency, and unstable structure because of the crystal lattice evolution energy, volume structural strain and irreversible dissolution during the Zn2+ insertion process. The above issues also lead to these materials having unsatisfactory power density and inferior cyclability. Moreover, these conventional inorganic cathodes contain toxic or polluting elements, which run counter to the development of large-scale, green and sustainable EESs.

Crystalline covalent organic frameworks (COFs) , with structural tunability, well-defined porosity, high chemical stability and intense π-π stacking favourable for electron transferring, have been widely investigated regarding catalysis, adsorption and separation, optoelectronics, etc. These features of COF, if they could be combined with electrochemically active organic monomer, might inspire new strategy to design hign-performance electrode material. Inspired by the above superiorities of COFs and the PTO monomer, a novel orthoquinone covalent organic framework with ordered channel structures (BT-PTO COF) was designed and synthesized based on a benzenetricarboxaldehyde (BT) node and a PTO active monomer. The experiment result indicates that the inherent order open channel structure of the material facilitates ion transfer and insertion, which is accompanied by the redox pseudocapacitance mechanism. Specifically, its adjacent carbonyl groups serve as a bidentate ligand for multivalent ions (Zn2+, Mg2+, Al3+). Furthermore, the π–π stacking interaction between the pyrene rings can improve the electron transfer efficiency. Ex/in-situ testing shows that the main insertion route evolves from the H+, Zn2+ co-insertion route to more H insertion routes at high current density.

A. Synthesis and Characterization of BT-PTO COF 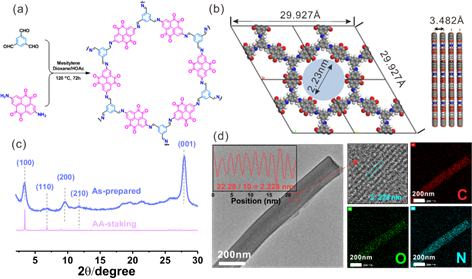 B. The electrochemical performance of the material

CV profiles shows that there are three reduction peaks, which correspond to three redox states of the COF during the cation insertion/deinsertion process. Galvanostatic (dis-)charge curves shows that the COF achieved a capacity of 221 mAh g−1 at a current of 1 A g−1. The capacity reached 172 mAh g-1  at a current of 85 Ag-1 , and remained at 108 mAh g-1 even at the maximum current of 500 Ag-1（1785 C), proved its exceptional rate performance. The cycling stability evaluation result is also satisfactory: it delivers an ultrastable durability of 98% capacity retention after 10 000 cycles at 5 A g−1.

C. Kinetic research of the material

To investigate the electrochemical kinetic aspects of the BT-PTO COF cathode, CV tests were conducted at different scan rates (0.1–100 mV s−1). Three redox peaks can be observed in the result, and all the b-values for both the cathode and anode peaks calculated from the curves of log(i)−log(v) in Figure 3b are close to 1, indicating the redox pseudocapacitance mechanism of the material. Significantly, from the extrapolated y-intercept the capacity of non-diffusion-control is 85 %, which accounts for its exceptional rate performance. The ion diffusion of the BT-PTO COF electrode measured 10-8~10-7cm2 s-1 by using the galvanostatic intermittent titration technique (GITT), which is superior to most of its counterparts. The most important reason accounting for the superior diffusion could be spacious open inner space and ordered tunnel structure, which expedites the diffusion efficiency of the ions. 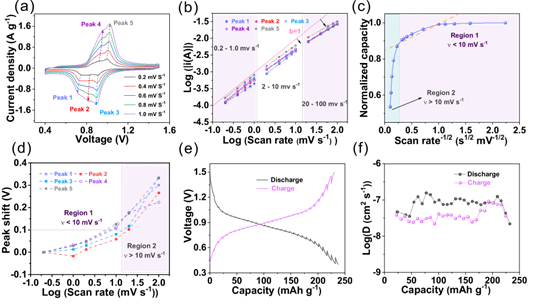 D. Electrochemical mechanism of the material

Thermodynamic calculation were conducted to predict the possibility of the insertion of H+, Zn+, or co-insertion of both ions.Furthermore, ex/in-situ analysis were carried out to confirm this Zn2+, H+ co-(de)insertion mechanism and sequence during the cycling. Typically, three stages corresponding to three redox processes can be classified: a Zn2+ insertion process corresponds to the first reduction peak around 0.89 V during the first stage. The second and third stages are associated with the reduction peaks at 0.8 V and 0.67 V, respectively, where there are masses of zinc hydroxide by-product forming. While the oxidation/charge process is the reversion process of the reduction/discharge with two H+ desertion and then Zn2+. 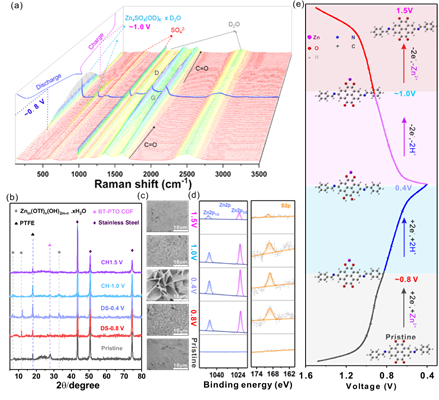