Zhilin Yu’s Group JACS: Advance on Self Assembly of Peptides in Macrophages

Peptides, due to their favorable biocompatibility and stable non-covalent interaction, are highlighted in construction of biomedical materials, especially for self-assembly of peptides in living cells via enzyme stimuli or in situ peptide nanostructures which lead the frontier in disease diagnosis and treatment. However, such assembly strongly depends on enzyme overexpression, thus inapplicable to detecting early stage pathological cells or interfering their fate.

For this problem, Zhilin Yu’s group has reported their work in JACS, titled ‘Self-Amplifying Assembly of Peptides in Macrophages for Enhanced Inflammatory Treatment’ (DOI: 10.1021/jacs.2c01323). They come up with the self-amplifying peptide assembling system and design a new mechanism based on the amplifying relationship between enzyme expression and peptide assembly. Through this relationship, in a normal enzyme level, they achieve the in situ assembly process in cells, showing a new way for in situ construction of biomedical material construction. 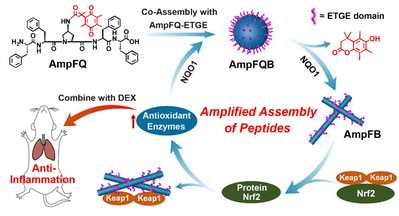 (Figure 1. Schematic Illustration of the Self-Amplifying Assembly of Peptides in Macrophages Associated with the Expression of NQO1.)

Based on previous study (J. Am. Chem. Soc. 2021, 143, 13854; Nano Today 2021, 38, 101198; Nano Lett. 2019, 19, 7965; Adv. Sci. 2019, 6, 1802043; J. Am. Chem. Soc. 2017, 139, 7823; Science 2016, 351, 497; Nano Lett. 2021, 21, 5730; Chem. Sci. 2020, 11, 1383；Nano Today 2020, 33, 100878.), Yu’s group design and synthesize a quinone propionic acid (QPA)-modified pentapeptide AmpFQ and its derivative (AmpFQ–ETGE) containing an ETGE sequence derived from the Nrf2 domains. The QPA moiety could be reduced by NQO1, leading to peptide FF-Amp-FF (AmpF) that assembles into nanofibrils under physiological conditions. The ETGE sequence acts as the binding ligand for protein Kelch ECH-associated protein 1 (Keap1), thus dissociating the Nrf2–Keap1 complexes and facilitating NQO1 expression. Coassembling peptide AmpFQ with the derivative AmpFQ–ETGE led to the self-amplifying assembling system AmpFQB. NQO1-induced cleavage led to the formation of pentapeptides assembling into nanofibers with high affinity to Keap1, thus activating the protein Nrf2 facilitating the expression of NQO1. The improved NQO1 level conversely promoted the assembly of the peptides into nanofibers, thus establishing an intimate amplifying relationship between the expression of NQO1 and the assembly of the peptides in macrophages. 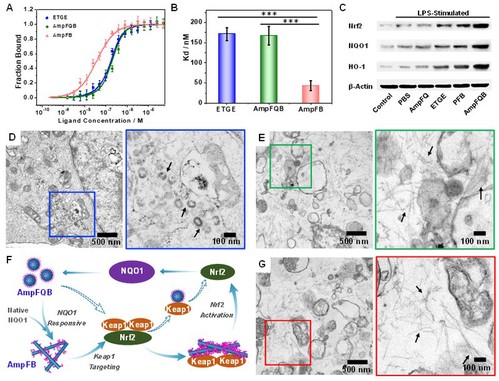 The group carry out WB studies and bio-TEM studies to confirm the upregulation of NQO1 in macrophages by the treatment with AmpFQB. They subsequently explore this system for enhanced anti-inflammatory treatment of acute lung injury. Coassembling peptide AmpFQ with the derivative AmpFQ–ETGE led to the self-amplifying assembling system AmpFQB exhibiting properties passively targeting acute injured lungs via the enhanced permeability and retention (EPR) effect. And both in vitro and in vivo studies revealed that this self-amplifying assembling system augmented the anti-inflammatory efficacy of dexamethasone via simultaneous alleviation of the ROS side effect and downregulation of proinflammatory cytokines. In particular, combining with the reliable targeting property of peptides, this system will provide one unique strategy for precise and efficient creation of supramolecular theranostic agents for disease diagnosis and treatment in the future. 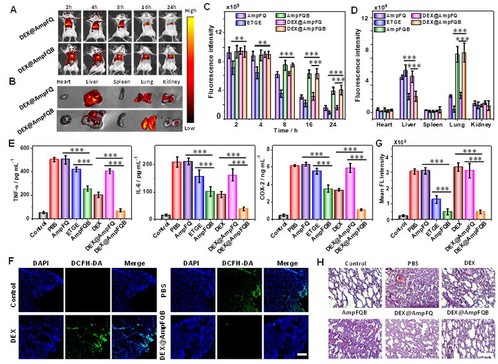 (Figure 3. Effects on the LPS-stimulated mice with acute lung injury administered with DEX@AmpFQB)

This work is published on J. Am. Chem. Soc.. Doctoral student Yanqiu Song is the first author; research fellow Zhilin Yu, College of Chemistry, Nankai University, is the corresponding author. The research is supported by the National Science Foundation of China.